Artifacts of Self-Determination:
The Rise of the Raizal

Daniels Faculty of Architecture at the University of Toronto

As part of the final thesis project for the Master of Architecture program at the University of Toronto, I created a series of visual representations to illustrate the speculative formation of a new micronation for the Raizal community in the archipelago of San Andres, Providencia and Santa Catalina. This project received the Kuwabara-Jackman Architecture Thesis Gold Medal for best thesis project and it got selected by KooZA/rch for an interview and feature in their platform.

The Raizals: A Brief History

The Raizals — a Creole-speaking people of Afro-Caribbean and British descent — have occupied the Archipelago of San Andres for centuries. Situated at the maritime border between Nicaragua and Colombia, the archipelago consists of two island groups and eight outlying banks, cays, and atolls.

The archipelago has been part of Colombia since 1822 but for the last century it has been a highly contested territory between nations — most notably between Colombia and Nicaragua. These disputes have caused generations of negligence and disregard for the Raizals' presence.

In 2012, the International Court of Justice in The Hague issued a ruling that drastically altered the maritime borders in the archipelago. The fight between Managua and Bogotá over the Raizals territory created a series of inconvenient divisions in the place that they have always known, related to, and understood.

The Raizals have lost their freedom to visit and operate in places that they have known to for centuries. Even though these territorial divisions are merely a series of dotted lines illustrated on maps, without a tangible physical presence, they are enforced and affect the Raizals' autonomy and displacement in their waters.

These debates between nations have ignored the fact that the archipelago is a network of islands, banks, cays, and other atolls that act as one connected system. It is time for the Raizals to claim the Archipelago of San Andres as their own and display their presence for the world to see.

The Raizals fear that the Nicaraguan military will take away their boats on the way to the northern cays and have stopped their fishing activities in places they have always known, related to, and understood.

The disrespect for their traditions, harm to their environment, and lack of acknowledgement of their presence have been tolerated for long enough. The rise of an independent nation is unfolding. Through a constellation of fragmented narratives, this project seeks to speculate on the journey of the Raizals as they move towards the realization of their own sovereignty.

Using the rationale of micronations, the establishment of the Archipelago of San Andres unfolds in a defined, self-proclaimed place whose boundaries, independence and recognition exist as both fact and fiction. Micronations convey narratives of sovereignty that are unacknowledged by formal states, but for the inhabitants that reside within their borders, they are very real. These narratives materialize in the physical world, giving them a presence even for non-believers to see. A micronation is not a place that belongs to its surroundings, but it is nonetheless in the location best-suited to it. It is a response to its inhabitants’ desires for independence, differentiation, and autonomy. Their howls for a recognition of their dissimilarity from their surroundings are translated into elements that represent their own fictions.

When a border only exists on paper without a tangible physical presence, its perception, existence, and reality become uncertain. 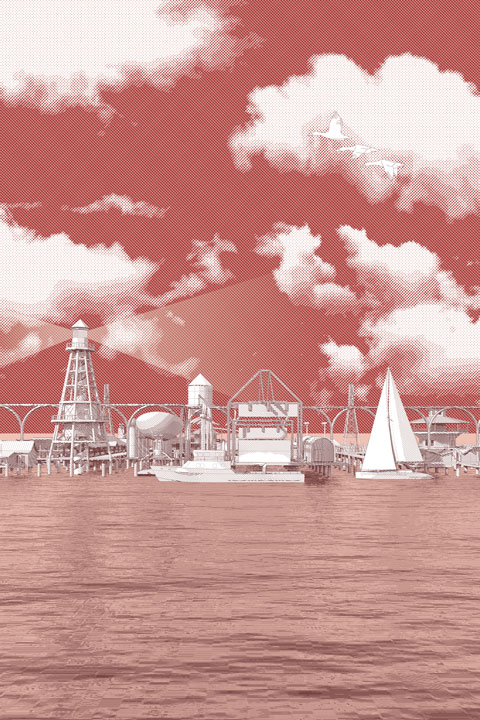 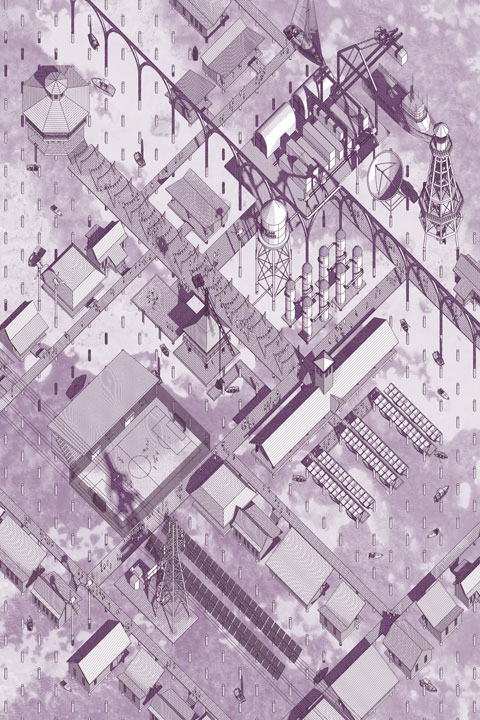 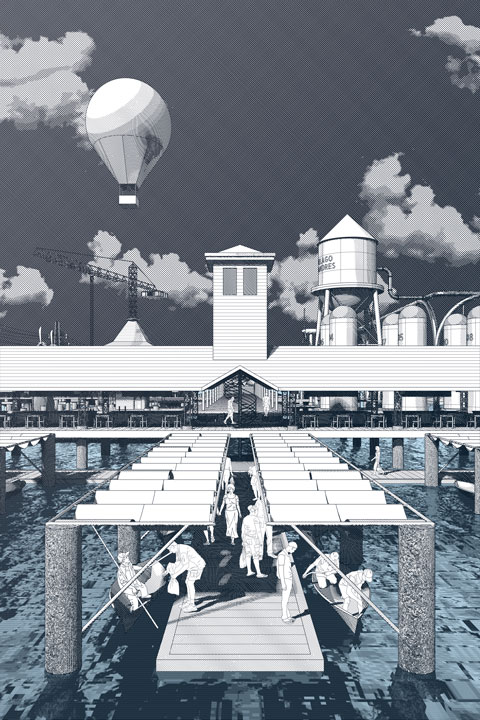 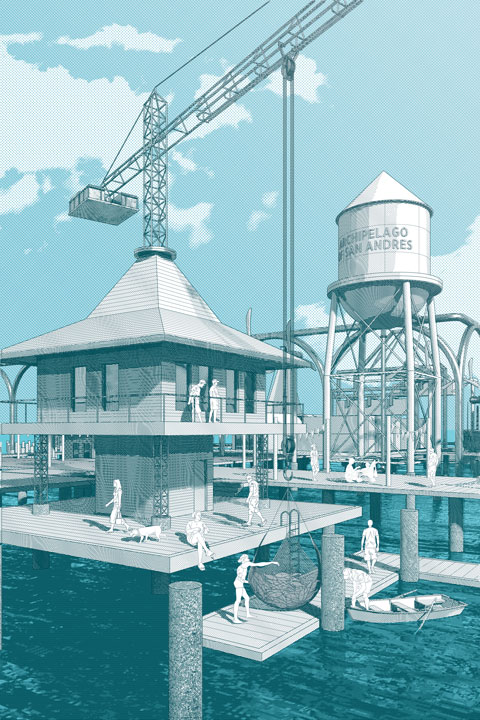 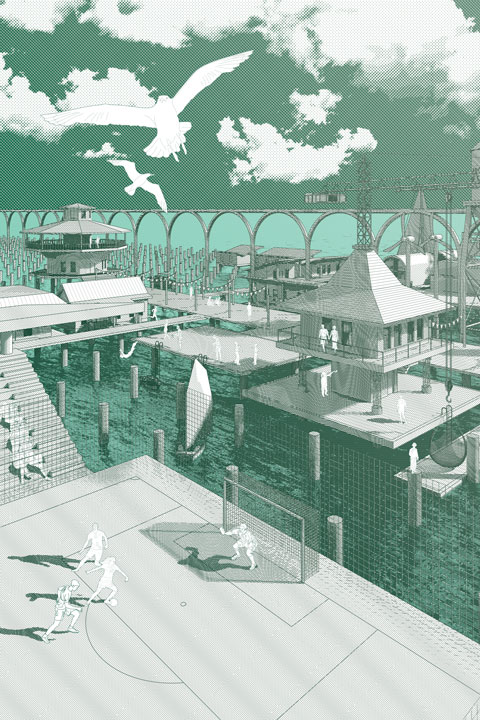 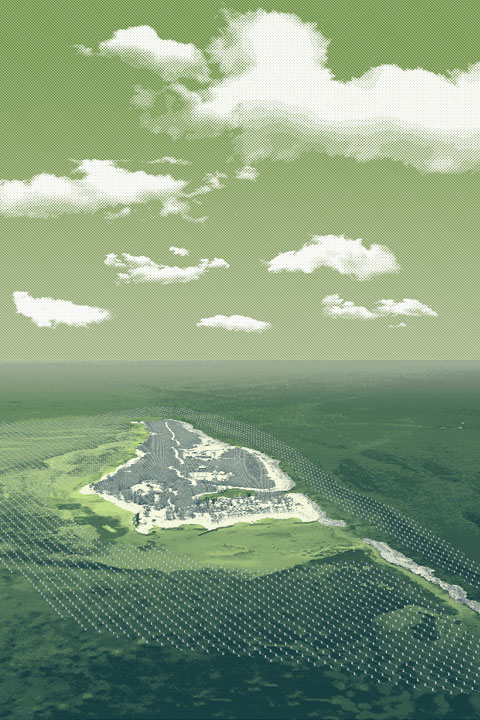 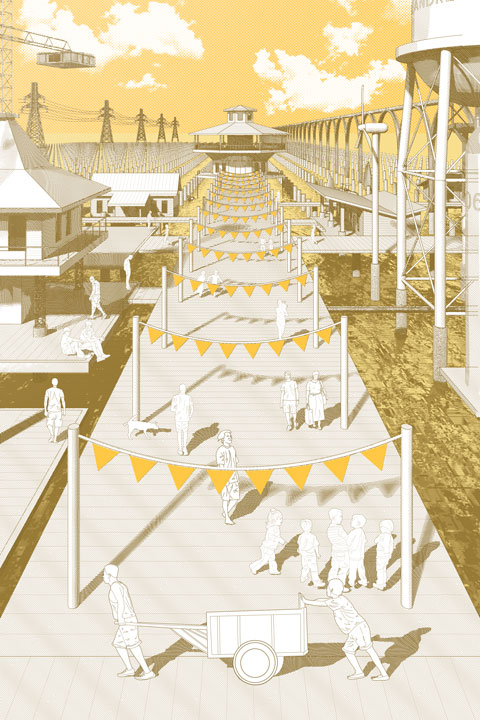 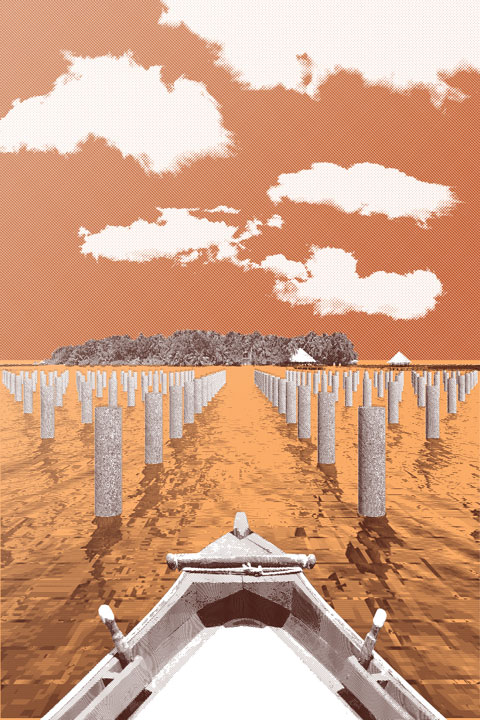 Through iterative graphic explorations, this project aims to question how architectural forms act as a medium through which the physical manifestation of self-determination can be explored for the Raizals. In conjunction with the non-architectural symbolic elements, built structures can be seen, used, and associated with a sense of autonomy and belonging.

Using anti-counterfeit hatching techniques, these images intend to represent a sense of authority, which the Raizals might believe in and trust.

The illustrations were used to create posters, currency bills, passports and postage stamps, which were displayed in conjunction to a series of artifacts and models during the final presentation exhibition. 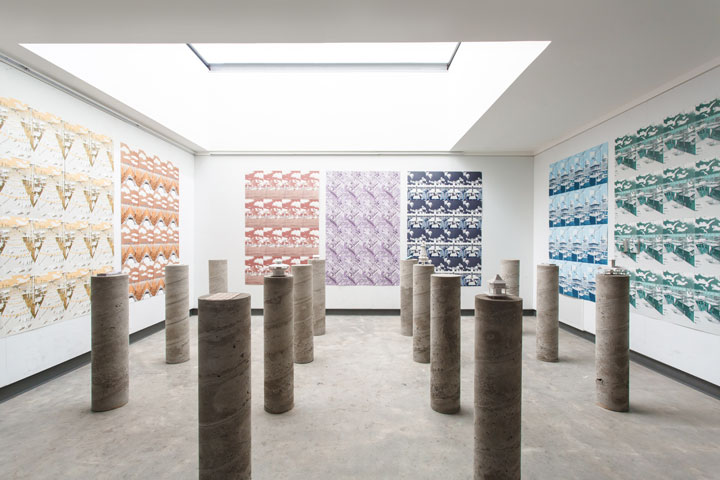 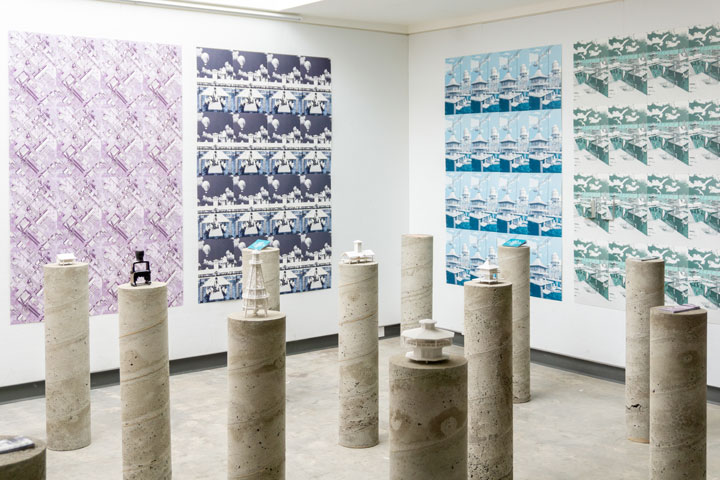 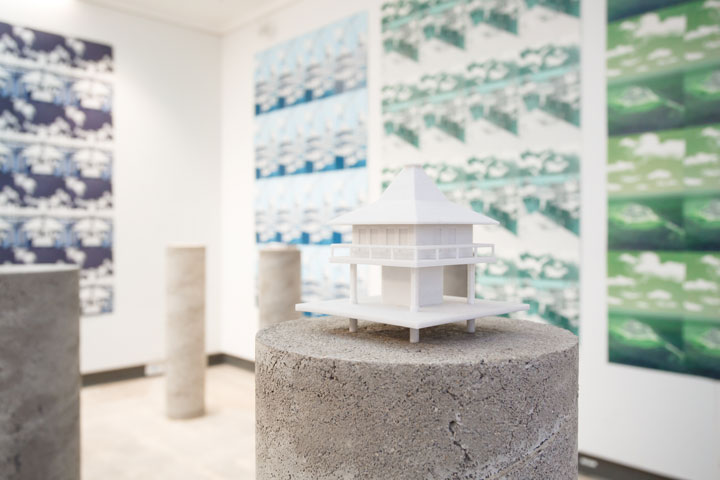 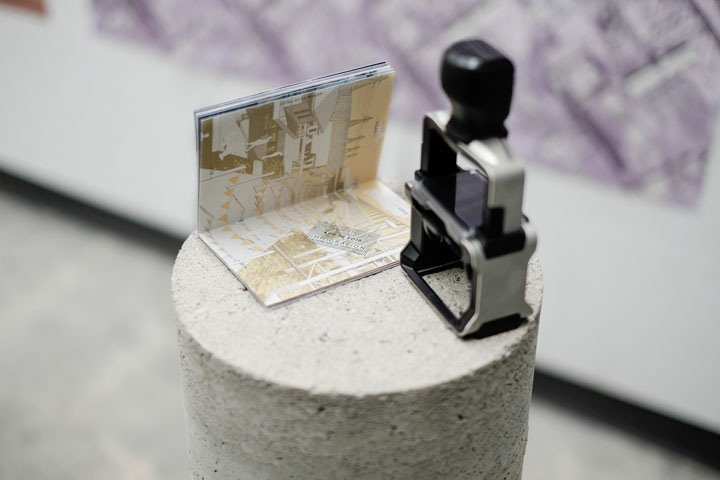 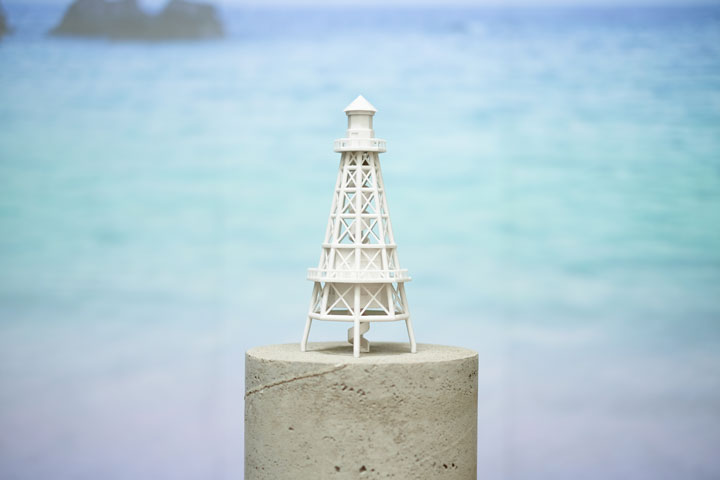 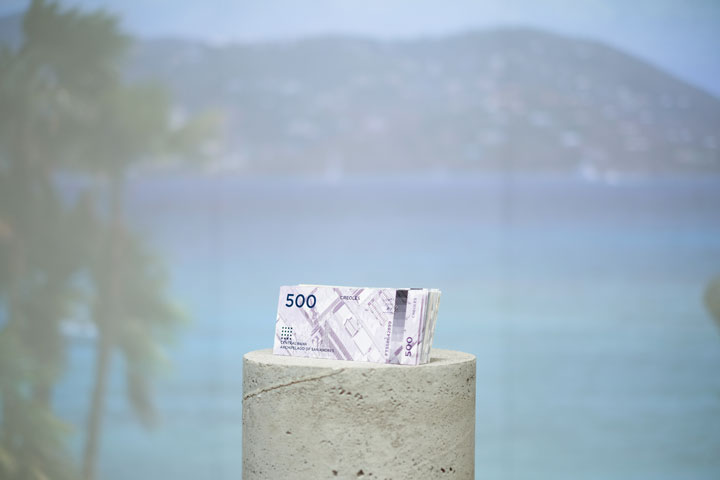 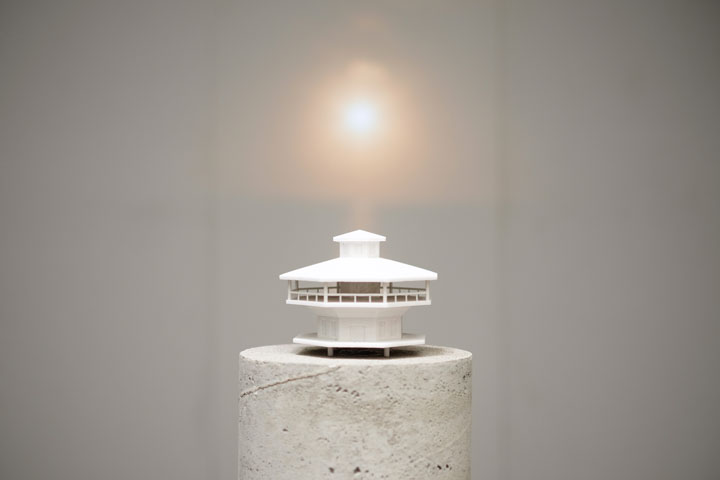 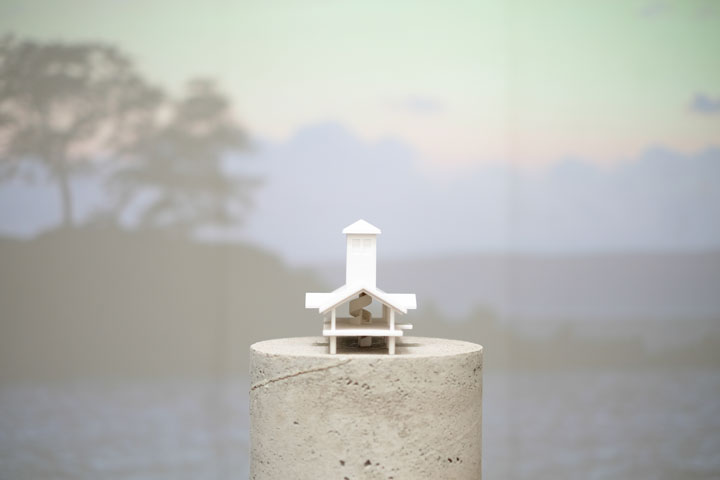 Special thanks to my advisor, John Shnier.